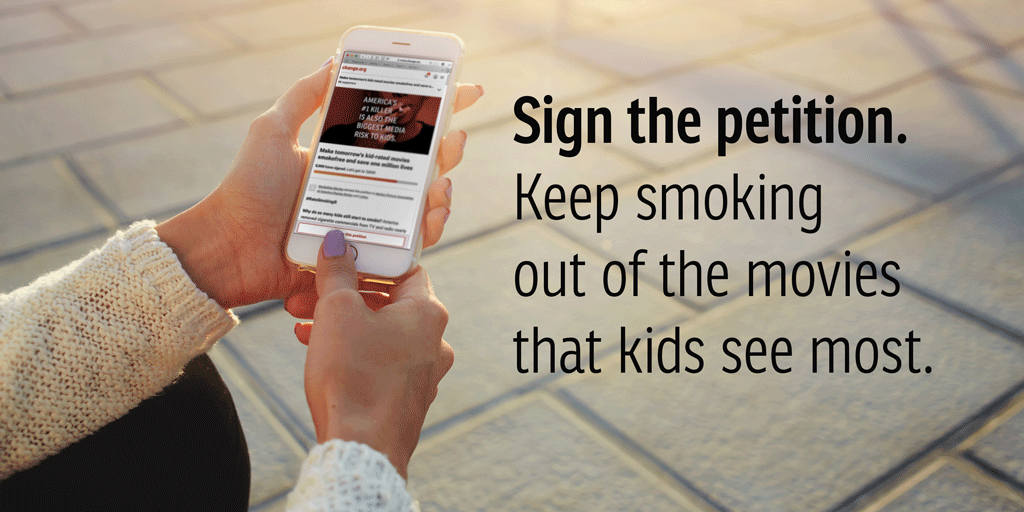 Petition has momentum | The MPAA, which runs the film ratings in Hollywood, likes to suggest that parents don't care about tobacco on screen. But the R-rating petition, set up on Change.org just six weeks ago, already has nearly 6,000 signers.

It's a mark of pent-up public support that only about 10 percent of the signers come from the usual suspects in tobacco prevention.

But the petition will grow even faster if one of Smokefree Movies’ large partners mobilizes its social media network behind it. The petition text is fully substantiated and merely mirrors the R-rating policy goal endorsed by Smokefree Movies' many partners. Aiming for 10,000 signers by the end of August...

Rivkin replied that he felt the Senators' pain but the MPAA had the right to keep parents in the dark about toxic tobacco in its board members' movies. That doesn't make it the right thing to do.

And his reply is undercut by the fact that half of the MPAA's board — Disney, Sony and Paramount (Viacom) — have kept all their kid-rated movies 100 percent smokefree for the first six months of 2018. Why can't the rest of the studios do that? And make the change permanent?

Adding to the pressure, ten days ago the California State Senate passed a resolution backing the R-rating by a bipartisan vote of 24-8 and referred it the Assembly for a vote in August...

Does merger frenzy play a role? | AT&T's takeover of Warner Bros. is up in the air again, after the DOJ appealed a judge's decision to let it go ahead. Meanwhile, Comcast (Universal) and Disney are both bidding for Fox studios. None of them wants to see a children's health scandal erupt just when regulators are paying attention.

Fox doesn't make it easy for its bidders, either. Having traded board members with Philip Morris for a quarter-century, back in the day, Fox has chosen 2018 to feature smoking in a staggering 88 percent of its top-grossing movies, including 75 percent of its PG-13 films.

Timing is almost everything | All these factors work together to make a solid show of public concern — at least 10,000 signers on the R-rating petition, for example — a priority. When the parents and others hear this story, they respond strongly.

Please do what you can to send more signers to http://bit.ly/R-petition and save a million lives. Thank you!