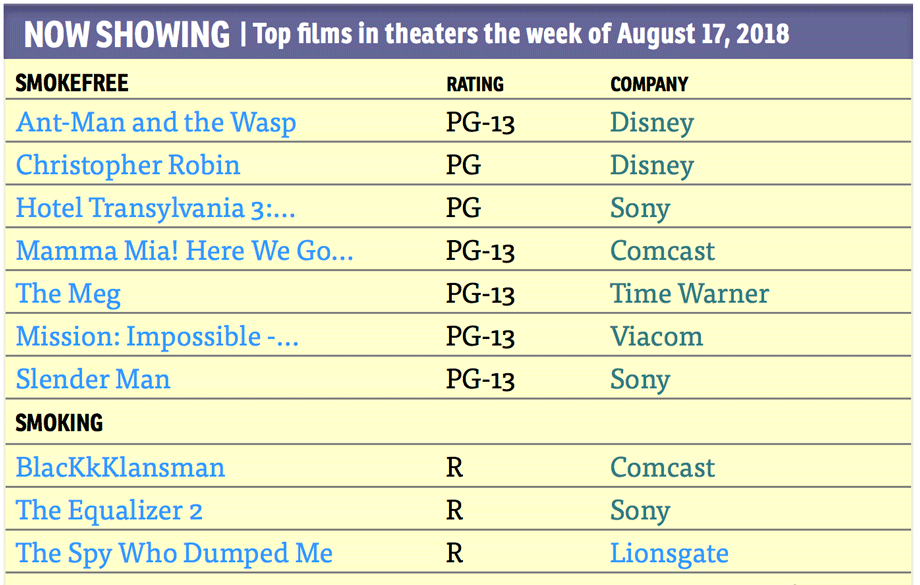 A safer summer on screen — but longer-term concerns

2018’s brightest development, so far, is that half of the studios making up the MPAA—Disney, Sony and Paramount (Viacom)—have kept all their youth-rated films 100 percent smokefree since January. Each company has achieved a smokefree or near-smokefree year before, but this is the first time three major studios have stayed smokefree at the same time.

But here are three reasons it’s too soon to declare victory:

1 | We’ve seen summer weeks like this before. Summer, when parents are looking for family-friendly fare, is the period when the major studios release their big-budget blockbusters, ready for the global marketplace and less likely lately to include smoking.

3 | Films released in 2018 were being planned in 2016, when the Forsyth lawsuit led major studios to lawyer up and, perhaps, proceed with caution. But Hollywood has hesitated to light up before other legal developments, such as the 1998 Master Settlement Agreement, then resumed smoking when tensions eased.

Our data through the summer suggest that 2018 as a whole will resemble recent years. That's unfortunate, because the film industry’s new norm is not good enough to protect the health and lives of millions of young people.

With three studios smokefree for the past seven months, why are industry numbers unimproved overall? Independents lag. And Fox in 2018 is as smoky as the California fire season: nearly 80 percent of its films have featured tobacco so far this year, almost twice the industry average. How will Disney handle those films in 2019, when its acquisition of Fox is a done deal?

Consistently R-rating future tobacco imagery would fix all of this overnight. If you haven't yet signed and promoted the Change.org petition, please do at http://bit.ly/R-petition. Follow the Twitter campaign at @onbeyondme.