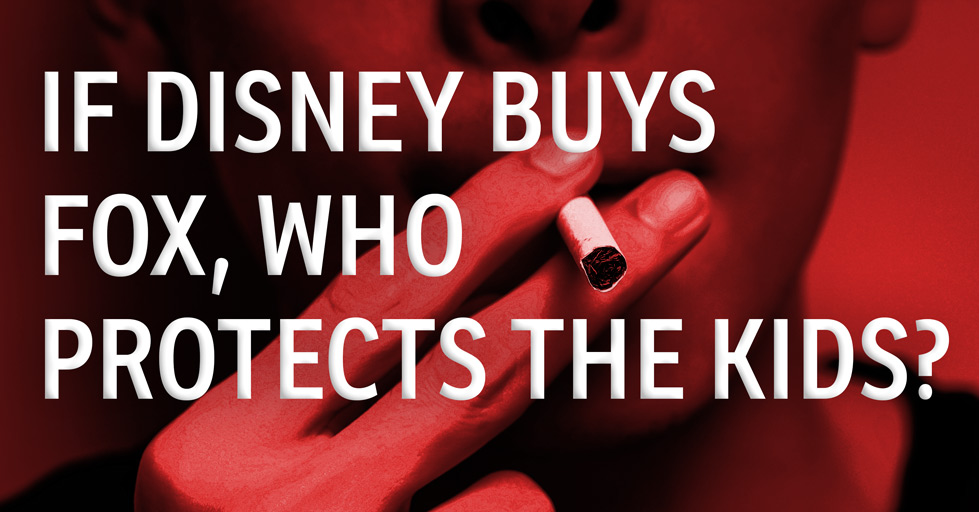 Investors with more than half a trillion dollars under management have asked The Walt Disney Company to protect young audiences from hundreds of Fox films with smoking that Disney will receive in its planned takeover of Fox assets.

Investors listed their concerns in a February 20 letter sent to Disney CEO Bob Iger before Disney's 2018 annual meeting. Signers include more than forty-five secular and religious investment offices and advisors active in the socially-responsible shareholder movement, including Calvert and Trinity Health, Dignity Health and Mercy Health.

The letter reminds Disney that movies with smoking are subject to a global treaty — the WHO Framework Convention on Tobacco Control — that obliges governments to stop crosss-border tobacco promotion. Investors warn that Disney "cannot afford to leave young people’s health and lives unprotected."

The letter gives Disney credit for its record against movie smoking: Disney was 100 percent smokefree in 2017. In contrast, Fox has released more than 150 top-grossing films with smoking in the past fifteen years, nearly 60 percent of them youth-rated.

The letter's organizers, Livonia, Michigan's Trinity Health and Sisters of St. Francis of Philadelphia, note in a press statement accompanying the letter's release that Fox and Philip Morris (Altria) were tied together through their boards of directors for a quarter of a century, up to 2013.

The investors propose that Disney extend its current tobacco depictions policy for Disney films to any future Fox-labeled films and to both Disney and Fox TV productions. It also calls for Disney to attach health warnings and strong anti-tobacco spots to any existing Disney and Fox films with smoking marketed worldwide.

Disney has not responded substantively to the investors' February 2018 letter, leading to its public release. Disney's Fox deal is expected to go through by the summer of 2019.

Updates | Another big Hollywood deal, the sale of Warner Bros. to AT&T, went through in early July, 2018. The Warner Bros. film library includes 200 recent films with tobacco, half of them rated PG or PG-13, according to the Breathe California Onscreen Tobacco Database.

As of the first week in July 2018, 88 percent of Fox's 2018 films featured smoking, including 75 percent of its PG-13 films. The average number of tobacco incidents in Fox's PG-13 films (39 incidents) was nearly three times higher than the industry average (14 incidents). In the first half of 2018, Fox films alone delivered 42 percent of all in-theater tobacco impressions delivered to domestic moviegoers.